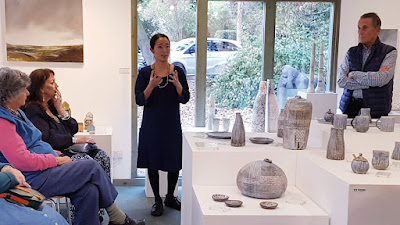 We have just enjoyed two hours with Yo Thom who provided modest but articulate insights into the development of her distinctive domestic ware. Although she developed all her interest in ceramics in the UK and trained with Lisa Hammond – a time which she talked of with affection and grateful thanks – there is no doubt that in Yo's pots we see a strong Japanese influence. She lucidly described the way in which her decorative  voice developed over the early years of her career.

Having moved from London to Shaftesbury in 2009 – a move partly influenced by her desire to take up wood firing – a difficult proposition in an intense urban setting – she started a family and the demands of three young children and settled for high temperature electric firing. However, she still has ambitions to take up wood firing.

Yo acknowledged that it would have been much more difficult for her to make her way in ceramics in Japan because of the hierarchy and elitism within centuries of making tradition. The status of ceramics is entirely different in Japan with established makers given high status in society. Nevertheless Yo welcomed the freedom she had working in the UK and the many opportunities that potters had to develop and take alternative approaches to their work.

Appropriately, we spent some time talking about the 'clothing of food' with hand built plates and culinary accessories. This certainly a long established Japanese culture which is certainly not widely observed in the UK with the exception of the ceramic enthusiasts, of course. Everyone agreed that Yo's pots added much to the pleasure of eating and drinking even the simplest of meals.

The lunch was enjoyed by everyone not only because Yo is a charming maker who enjoys talking about her creative endeavour but because  they engaged completely with Yo and importantly her fine pots. This lunch confirmed, yet again, the value of this monthly event in promoting wider interest in ceramics and their origins. Thank you Yo for making the effort to be with us.

Artworks in The Gallery at Bevere